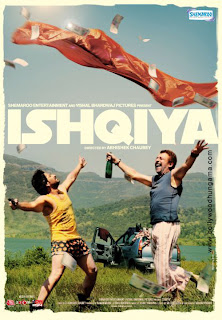 ISHQIYA is the kind of the movie that can easily fit into either the genre of comedy or thriller. How good for us that it fits into both simultaneously. The movie is about two con-men, Khalujaan and Babban who double cross their boss and run away with his money. On the run, they take shelter at the house Krishna – young widow of an acquaintance of the two con-men. The story then, makes way for a triangle love story. The sentimentalist Naseeruddin Shah and the flirtuous Arshad Warsi both fall for the gorgeous looking Vidya Balan who plays with the emotions of both the men. At this stage, the boss who also happens to be the ‘jija-ji’ of Khalujaan, traces the con-men to their hideout and demands that his money be returned before he kills them both. Now, the con-men realize that their stash is stolen and end up begging for their release so that they can find the thief and return the money back to the boss. Now, who robbed the thieves and how will the trio tackle the boss, forms the rest of story. The story looks simple but is packed with many interesting twists. The best part of the script is that it is a thorough entertainer at the same time without being very predictable. Even the sub plots are revealed just in time when is required. What makes the movie even more an engaging watch are the innumerable witty one-liners and slang that holds the plot together. For example, watch out for the 15 year old boy referring to his age as “paanch kum bees”.

The characters of the movie are not exaggerated as in most of the comedy films and hence become more relatable. Of the cast, Naseeruddin Shah and Arshad Warsi, casted as Khalujaan as Babban respectively sparkle in a performance that is sure to be loved by the movie-goers. Vidya Balan too plays her role of seducing both the con men simultaneously for manipulative intentions. In the end, it would be impossible to choose one better performance from among the three leads. The director, Abhishek Chaubey has struck the fine balance between portraying the drama to be realistic and plot interesting. The music by Vishal Bharadwaj adds to the appeal of the movie. Of the tracks, “Dil to bacchha hai…” and “Ibn-e-Batuta..” stand out.

At the end of the day, it’s hard to analyse why ISHQIYA will work. Is it because, all the characters have a certain depth and identity to them or is it that the actors have portrayed these characters exceptionally well. I personally believe that it’s both. The success formula of ISHQIYA is not something that has been tried before. It is not a movie that stands at the end of a tradition of bollywood films. I earnestly hope it will mark the beginning of more to come.

I rate it 4/5.
A thoroughly engaging watch.

One Reply to “Ishqiya – Movie Review”