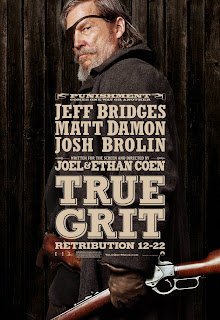 True Grit, written and directed by Coen Brothers is adapted from a 1968 novel by the same name, authored by Charles Portis. This Oscar Nominated movie follows the life of a 14 year old girl who sets out to avenge her father’s murder.

Mattie Ross (Hailee Steinfeld) talks the U.S Marshal Rueben Cogburn (Jeff Bridges) into pursuing Tom Chaney (Josh Brolin) for a reward of $ 50 (Note that the plot is set in early 20th Century). Along comes the Texas Ranger LaBoeuf (Matt Damon) also looking for the same convict for a different reason.

After a while, the three set out together to catch the convict. The movie has a simple yet interesting plot; one that reveals itself nicely.
The story unfolds as well laid out drama that will keep you interested all through the 110 mins of the movie. As the story progresses and the going gets tough, each of the protagonists find their own ‘true grit’ challenged and eventually overcome it. They build a special bond between each other as they come in terms with themselves and each other.
All the three lead actors of the movie have delivered top notch performance on top of the well laid out plot. Now that’s a favorite combination for the Academy Award jury. I am not sure if True Grit will go on to win the the Oscar for best movie. But it definitely is in the league.
If you’ve enjoyed movies like Unforgiven and The Assassination of Jesse James, this is something that you will definitely appreciate.