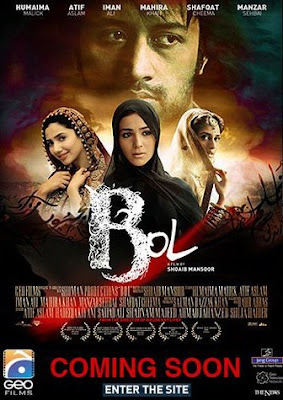 The movies with social messages have traditionally connected with the audience through subtle hinting, humor, social drama and at times even shouting. However, ‘BOL‘, written and directed by Shoaib Mansoor slaps you off the comfort zone to get you to relate with the plot and think. Shoaib Mansoor, much renowned for ‘Khuda Ke Liye‘ delivers more food-for-thought through intelligent story telling.

The plot of Bol is based in contemporary Lahore and revolves around a patriarchal family. Moulvi Sayed Khanab is an aging Hakim living with his wife and 7 daughters. The going gets tough when his desire for a male child persists and begets an eunuch ‘son’. Poverty and social stigma that the family faces sets the stage for a debate on topics such as girl child education, women rights, sexual orientation, patriarchal model and not to mention the justification of social evils under the veil of religious practices.

The plot is revealed as flashback as narrated by the eldest daughter Zainab Khan (played by Humaima Khan). The movie lends ample debate on important societal topics and concludes with raising an important question. As though the entire plot was laid as a stage, only to make THE POINT.

Bol has some of those impact scenes that will linger long after the run time of the movie. Watch out for the scene in which the eunuch  reasons with his sisters on why can he not freely express his sexual inclinations. In an other scene, Hakim confronts his conscience after succumbing to what he knew was  wrong all his life. Also, you cannot ignore how the protagonist is seconds away from being hanged, but yells and screams to make her point heard; raise the big question before going down.

When compared with Khuda Ke Liye, Bol suffers from sluggish pace and also lack of good songs. The plot also leaves many a loose ends that either deserved to be clipped or tied better.

In the end, its a good watch for those who enjoy food-for-thought movies.