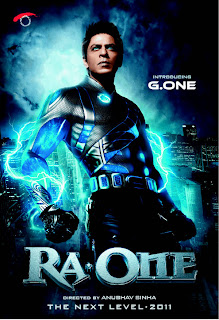 To begin with, let’s acknowledge and credit the fact that Ra.One is India’s first 3D movie with an A-list production team. This ambitious venture with an estimated cost of INR 175 Crores (USD 36 Mn) attempts something new and assumes a scale no other Bollywood film of this genre has managed so far. The movie introduces the possibility of projecting virtual reality into the real world through the existing electromagnetic and other forms of signals around us. Shekhar (A south Indian version of SRK) takes his son’s suggestions seriously and creates a combat video game in which the villain (Random Access-One aka Ra.One) has artificial intelligence and is invincible (well, almost). On the day of the game’s launch, Prateek (Shekhar’s son, played by Armaan Verma) tries the game and walks away without completing it.
Ra.One, agitated by the beating he took by Prateek in the game, decides to chase him into the real world and complete the game (read, Kill-Him). Soon, the protagonist of the video game, the Good One aka G.One is dragged into the real world to stop Ra.One from killing the kid. What follows is our superhero-with-a-HART (No, I did not misspell it) fighting out a Good v/s Evil battle on the streets of Mumbai. Ra.One works on several counts. To start with (the most ostensible one), the action sequences and the 3D special effects are top notch and are as good as they have ever got in a Bollywood movie. However, in scenes other than fights and chases, the 3D only as much as highlights the depth of field. The movie takes ample time to lay down the plot synopsis (almost till interval), which makes it believable to a certain extent. Shah Rukh Khan (Shekhar / G.One) has excellent screen presence (far better that what we have seen of him lately). His charm alone drives most of the movie with fair success. The songs are peppy and affable; full credit to Vishal-Shekhar and Akon. On the other hand, Ra.One like every other Bollywood movie with a sci-fi plot suffers from the same drawback – the eluding perfect balance between Hollywood kind of special effects/plot/narration and Bollywood masala. For the fans looking out for a gripping plot, all the pelvic thrusts, chamak-challo numbers, Robot-Widow love story, gay jokes, South Indian accent jokes and robot-spanks-Kareena-in-the-ass jokes are definitely irritating. On the other hand, the Gallery-Dudes may not either appreciate villain coming out of a video game or comprehend why the villain is not unto destroying the world but just the kid. Frankly speaking, even with all the special effects, Anubhav Sinha (director) hasn’t really ventured beyond the tried and tested Bollywood mix – a pretty young widow, a super hero resembling her lost husband, cute young kid and Good beats Evil (more so on Diwali weekends).
Also, movie goes way out of line to appease the Gallery-Dudes. Watch out for Sanjay Dutt (as Khalnayak) and Priyanka Chopra (as Desi Girl) in cameo roles. Even, Sri Sri Sri Superstar Rajnikant (Yes, I’m a proud south Indian) is summoned to deliver the line – “Hi, I’m Chitti. Speed 1 Tera Hertz, memory 1 Zetta Bytes“. Down here in South India, that one dialogue gets more applause and whistles than rest of the movie does. There is a scene in the movie wherein noodles is served with curd. Put in simple words, that is exactly how Ra.One is presented to you. In the end, you will like/dislike Ra.One based on how much of Hollywood can you tolerate in a Bollywood movie or vice-versa.
It’s worth a watch and surely you’re entitled to your opinion. Don’t let anyone tell you otherwise. My Rating: 3/5 Fav Song: Dildara (Nice fusion with Stand By Me – Lennon John)
Like it? Share this review on FACEBOOK and/or TWITTER
I’d like to hear your opinions about this movie and the review. Do drop a comment.
By JayanthCategories: Tags: Movie, Review