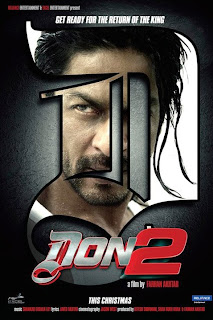 Bollywood’s most awaited Christmas blockbuster and Shah Rukh Khan (SRK) starer DON-2, even by conservative judgement is a Huge-Disappointment. A classic case study on what happens when the movie-goers are taken for granted.

SRK, reprising his role as the Don leads the pack in the efforts. One can understand the necessity to portray Don as larger-than -life character, but trying to assert the point in every frame becomes overpowering. SRK minces, hisses, sarcastically smiles, stretches eyebrows literally for every dialogue. Emphasizing every line as though it were THE punch line of the movie.

This happens too many times and too soon the protagonist begins to look very fake.

3D does good in improving the viewing ambiance and nothing more. Frankly speaking, neither the plot nor the narration demanded this technology.

How it all must have happened
The script writers (the famous Salim-Javed duo) consensually decide that brain dead zombies (preferably glamor conscious) be their target audience. Then they seem to have argued if DON should be a good guy or the bad guy in the movie. No consensus on this one. So there are two guys writing the script, one portraying Don as ruthless killer and the other as a hopeless romantic.

Oh wait, what do we do with the old characters? Let’s break out Vardhaan (Bomman Irani) from the prision and put him back there in the end. Mr. Mallik (Om Puri) can answer the radio and give random and inconsequential orders to Roma (Priyanka Chopra). Roma can lend some of her own love-status uncertainty to DON’s identity crisis. Okay, thought Farhan. “This will sell”. “At least on Christmas weekend”.

To summarize: Director thought he had great actor, music director and script writers; so took a nap. Music Director decided to concentrate on other assignments as this one could sell purely on the script and direction. Script Writers were assured that anything in the name DON will sell. Actor decided to assert his super stardom in every scene.

DON, touted as the suave con in the promos, comes out really as a confused buffoon in the movie.