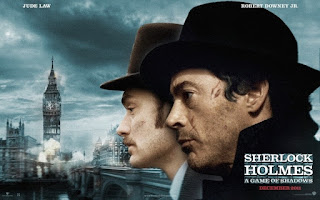 Directed by Guy Ritchie, Sherlock Holmes: A game of shadows (2011) is a winner and a worthy sequel to the Sherlock Holmes (2009). The movie is an indulging watch, thanks to sterling performances by the leads, intelligent story telling and brilliant camera work.

Plot revolves around Sherlock Holmes (Robert Downey, Jr.) and Doctor Watson (Jude Law), investigating a series of bombings in which the mastermind goes onto leave no evidence or witnesses. The investigation leads them to Simza (Noomi Rapace) before the assassin; someone who helps them to put the pieces together. The trio then embark on an investigation chase across Europe (London, France, Switzerland) only to realize the larger plan of the mastermind Professor Moriarty’s (Jared Harris). Sooner than you know, our boys are doing what they do best; saving the world while putting their own life in risk.

The beauty of this movie is how the plot unravels beautifully with time; just as you like it in a detective-flick. Even the sub-plots involving Dr. Watson’s marriage to Irene (Rachel McAdams) or that involving Mycroft Holmes (Stephen Fry), Sherlock’s elder brother lends humor and adds to the story.

Except for Sherlock can sniff-lick anything and tell its past and future, I found almost everything else in the plot believable.

In keeping with Guy Ritchie school of film making, the movie is replete with witty one liners and way-beyond-awesome camera effects. In particular, the chase sequences and the explosions are beautifully captured by the ultra slow motion cameras. Watch out for the particular scene wherein our protagonists are running for their life in a jungle while bullets breeze by them and bombs are exploding all around. Each frame is so rich with details that even ultra slow motion photography leaves you insatiable.

In the end, I am not sure what works better. Guy Ritchie’s characterization of Sherlock Holmes or it’s portrayal by Robert Downey Jr. I strongly recommend you watch this movie and preferably on a big screen to find it out yourself.