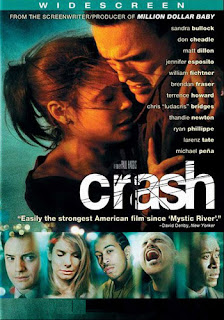 Lets begin with an undeniable fact. This movie is as much a delight for movie buffs as is a challenge for critics. If you could consider the phrase, food-for-thought in the literal sense, this movie is among the finest meal of this genre in town. A deserving winner at the Oscars – Best Movie, Original Screenplay and Film Editing.

delves into a sensitive topic and covers so much ground in such short time; all with a finesse that will crash your perceptions of seeing things in black and white.

Sensitive topic: The movie explores the concept of people thinking of and treating each other in stereotypes. Perceptions about the White guy and the Black guy that are deep ingrained in our subconscious mind and in our contemporary society. What they perceive of themselves, each other and Non-Americans at large.

So much ground: The story is laid out as several overlapping sub-plots wherein the characters keep crashing into each other over a span of two days. As circumstances put them on a bumpy ride, each one realizes the strains of racism deeply ingrained in themselves; something they did not know existed. Some of the most interesting subplots include a district attorney trying to balance public opinion on both stereotype, a black-white couple confronting differences in perceptions of each other, cops failing to understand their own sensitivities and a black detective reduced to chose between pursuing truth and neutralizing stereotypes. Also, a special sub-plot on faith; one about wearing an invisible cloak of justness that is impenetrable to racial hate.

A finesse: The movie becomes extraordinary because of two reasons. Firstly, choice of the grey-matter for dissection and secondly the fine skills with the scalpel. I have not come across another contemporary movie that tests the depths of racist inclinations. Clearly, a theme less talked about and adapted to the screen like never before. Talking of the scalpel, movie digs out the skeletons from cupboards that you did not know existed in your mind. Also goes on to reveal how much they are commonplace yet unnoticed.

Things in Black and White: The movie begins with characters with a distinct strain of either white or black. The plot then interweaves them characters so much that, by the end; few find clarity, most get lost.

In the end, it’s a movie you CANNOT-MISS. A one-of-a-kind journey to explore you and me. Yes, both of us.

A plot like this, there is more than one way of seeing it. Do let me know how different was your viewing experience.
By JayanthCategories: Tags: Movie, Review