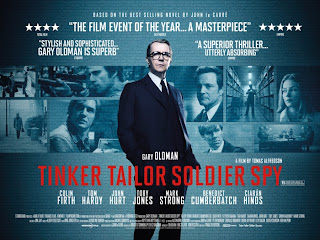 Most contemporary British spy movies (read James Bond series) have got us a good look at suave agents paired up with hot chicks, chasing super villains on fast cars and hunting them down with uber cool gadgets. That is one extreme of the genre. Directed by Tomas Alfredson, and based on a novel by the same name, Tinker Tailor Soldier Spy (TTSS) is a gem of a movie belonging to the other extreme end of the genre.

Set in the the early 1970s during the heights of Cold War, the plot follows the tension in the British Intelligence bureau (also referred to as Circus) after a failed operation. Control (John Hurt) heads the Circus and sends Jim Prideaux (Mark Strong) on a secret mission to meet a certain general in Budapest and get vital information about a soviet mole in their team. The Soviet intelligence intercept the mission and kill Jim. After the incident, Control and his close aide George Smiley (Gary Oldman) get expelled from the Circus.

Years later, when Control is dead, Smiley is summoned to conduct an off-record investigation in to the incident and identify the traitor within. He takes up the task to solve the ONE puzzle that remained unsolved in his otherwise illustrious career. Smiley now has to carefully examine four of his close buddies – Bill haydon (Colin Firth), Percy Alleline (Toby Jones), Toby Esterhase (David Dencik) and Roy Bland (Ciarán Hinds); one of who is a traitor.

In the heights of the Cold War, strength of the intelligence network is the back bone of a nation. As decisions and alliances are formed based on the intelligence, the role of Circus in the security of the nation is critical. In this context, the rumor of a soviet mole in the top echelon of British intelligence forms the premise for TTSS.

The movie is a winner on two counts – the plot and performance by the protagonists. The plot reveals itself wonderfully, with all its intricacies and all the actors do extremely well to hold up the suspense. Gary Oldman leads the pack with a deserving Oscar nomination for best actor in a lead role. The very talented Tom Hardy makes his mark yet again in his brief yet powerful portrayal of Ricki Tarr.

A large part of the movie is shot in dark sets, dull colors and with slow dialogues. This makes the run time of 2 hour and 10 mins seem much longer. Clearly, TTSS takes a lot of concentration is not your average peppy-feel-good-over-weekend movie. More likely to find an interest among those that appreciate intense and de-glamorized drama and have a taste for mind-games.