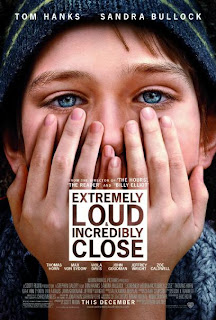 Based on a novel by the same name, ‘Extremely Loud and Incredibly Close (2011)‘ is a heart warming story of a 9 year old boy coming in terms with the untimely death of his father. One of the most under rated movies, ELIC brilliantly captures an innocent mind’s struggle to make sense of the not-so-logical world of the grown ups. The Plot:
The protagonist Oskar Schell (Thomas Horn) suffers from Asperger syndrome; an anomaly characterized by difficulty in socialization and repetitive patterns of behavior and interests. He is intelligent, inquisitive and at the same time different. Oskar shares a very attached to his father Thomas Schell (Tom Hanks) but maintains a distance with his mother Linda Schell (Sandra Bullock). Thomas leaves no stone unturned to assure his son that he is special and often sends Oskar on outdoor explorations; get him to understand the world through logic and reason and of course socialize with people.

All is well until 9/11 when Thomas gets killed in the WTC. The young mind reasons hard to understand why someone should kill a building full of unknown people. While randomly looking in his father’s closet, he stumbles on an unknown key in an envelope.

Oskar tells himself, it takes eight minutes for the sun’s light to reach earth. Even if the Sun were to disappear, we wouldn’t know for 8 minutes. Oskar is convinced that his father wanted him to find whatever this key opens and this was his eight minutes with his father. The young-different mind sets out on a mission to make sense and the most of his eight minutes.
Will Oskar find the lock which the key opens? Why did Thomas leave behind a random key? What does the key open? What did Thomas want his son to find?

What makes it special:
The plot has an inherent innocence to it which lends the essential charm to an otherwise ordinary plot. An adult mind may find many a loop holes and flaws, but then, this movie is intended to be seen through the eyes of an nine year old different/special kid. Once you get on with it, ELIC is a wonderful journey following Oskar’s innocence and live though his discoveries and realizations as your own. That makes this movie a winner which in the end a journey from denial to acceptance, fear to strength, unknown to discovery, strangers to friends and innocence to realization.

There are many scenes that will take you down the memory lanes of your own childhood. Kid-under-the-cot scenes, a hidden closet of precious items, relationship with grandmother among others.
The characters of ELIC coome out very real; thans to the perfect cast. We all know Tom Hanks can put life to any role and there is no denial of Sandra Bullock’s hyper-specialization in emotional roles. However, the true gems of the movie are Thomas Horn as the special/different kid and Max von Sydow as the mysterious-mute neighbor. Max dos not speak one word in the movie and yet has been nominated for an Academy Award (Best Supporting Role); I earnestly hope he gets it.

Movies like these are rare to come; a ride like this is ought not to be missed.
Do not take your grown-up-mind to the movie.
My Rating: 8/10
Fav Lines:
By JayanthCategories: Tags: Movie, Review