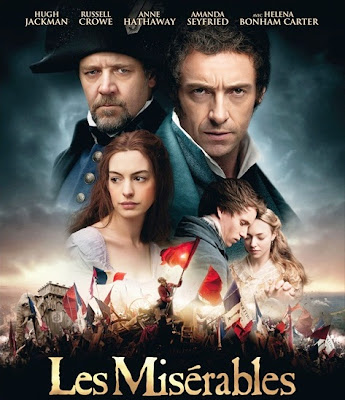 It wouldn’t be just to review this movie in isolation to the masterpiece from Victor Hugo. So, I wouldn’t even attempt to do it. All the more when Les Miserables (2012) remains so faithful to the novel. After all, who dares flirt with near perfection.

The Plot:
For the unaware, Les Miserables is a timeless tale; one that will test the corners and the depths of the heart and stir up every emotion residing in there.

Set in the early to late 19th century, the tale follows the life of Jean Valjean enslaved by the law for stealing a loaf of bread to feed his sister’s dying son. After serving 19 years for the petty theft, he gets released on parole. But then, the society humiliates him further into desperation & hatred. Finally, a priest takes him in, offers food, wine and shelter. Allow him to rest from pain and wrong; motivating him to give up hatred.

Jean Valjean then decides to give up his old life and to start afresh. Only this time around devoting his life to the way of god and righteousness in the process breaking his parole. But it wouldn’t be easy as Inspector Javert (his parole officer) will stop at nothing to put him in chains.

What follows is a heart wrenching tale that puts Valjean’s conscience to test in turbulent times. Can Valjean walk the path of righteousness till the very end? Can he keep his promises against all odds? Will his past haunt him and those he care about? Will he finally learn to let go, forgive & love?

The Review:
Prior to this, there have been at least 12 movie attempts based on this novel; the earliest of them (in English) being in 1909. As Victor Hugo pointed it out himself, “As long as ignorance and misery remain on earth, books like this cannot be useless”. One can easily replace the word ‘useless’ with ‘irrelevant’.

Even the smallest characters (if there were such a thing) in the novel have such interesting persona about them. Their battles of the heart and mind, even though set against the backdrop of the Paris uprising in 1860’s are still relevant today; and across the world. That’s what perhaps makes ‘Les Miserables’ a timeless classic.

The 2012 adaptation on the big screen is worth every penny. The director, Tom Hooper (King’s Speech) has done full justice to the novel deserving 8 Oscar nominations including the ‘Best Picture’. The movie drags you into a magical world right from the first scene and the first verse. The visualizations are near perfect and the technical aspects equally flawless.

The performances by the actors are brilliant. Most of them have lived upto the high expectations of the novel; few seem to have surpassed it.

The novel introduces Jean Valjean as someone with of extraordinary physical and mental toughness. Hugh Jackman (6′ 2″) fits right into the description and delivers a convincing characterization. His acting and voice modulation are commendable. He personifies the man who has to frequently break the law to keep his conscience. He brings out all of Valjean’s rage, hatred, confusion, fear, doubt, joy, bliss, possessiveness, love in vividness worthy of the Oscar nomination. I hope he wins it.

Inspector Javert is a man who follows duty without a conscience. He only sees things as lawful or otherwise than right or wrong. Russell Crowe meets expectations of this character. His voice has a natural essence of authority that lends some advantage.

Anne Hathaway surpasses expectations as Fantine, the lady who has been wronged in all possible manner. A hard working single mother, burning at both ends to keep her child alive. Look out for her rendering of ‘I dreamed a dream’; one of the most powerful moments of the movie and also most poignant moment in the tale.

Another actor who surpassed expectations is Samantha Barks in her role as Éponine.

Why this movie works:

The Narrative: The most appealing aspect of this movie is clearly it’s musical narrative. This is perhaps, the most successful mainstream Hollywood movie in over a decade with this narrative. The lyrical dialogues and background music makes the saying more powerful. It is commendable how the actors have balanced their acting and singing simultaneously.

Overlapping dialogues: One of the beautiful things that music allows is to have overlapping dialogues presented in the same tune. This has been used to great effect several times in this movies. In multiple scenes, protagonists sing out their lines (unconnected to each other) in the common tune leading upto a crescendo.

Renderings/Lyrical: No better way to express your emotions than to sing it out. Les Miserables is a treat of some of the finest musical pieces. Here are my top 5 picks (in the order) from the movie.

I think, if you haven’t read the book, you’re missing something big in life. If you skip the movie, you wouldn’t realize that something this-good even exists.

This movie is a 9/10
The novel will forever remain 11/10
By JayanthCategories: Tags: Movie, Review